We buy, sell and refurbish some of the world’s most important networking equipment. 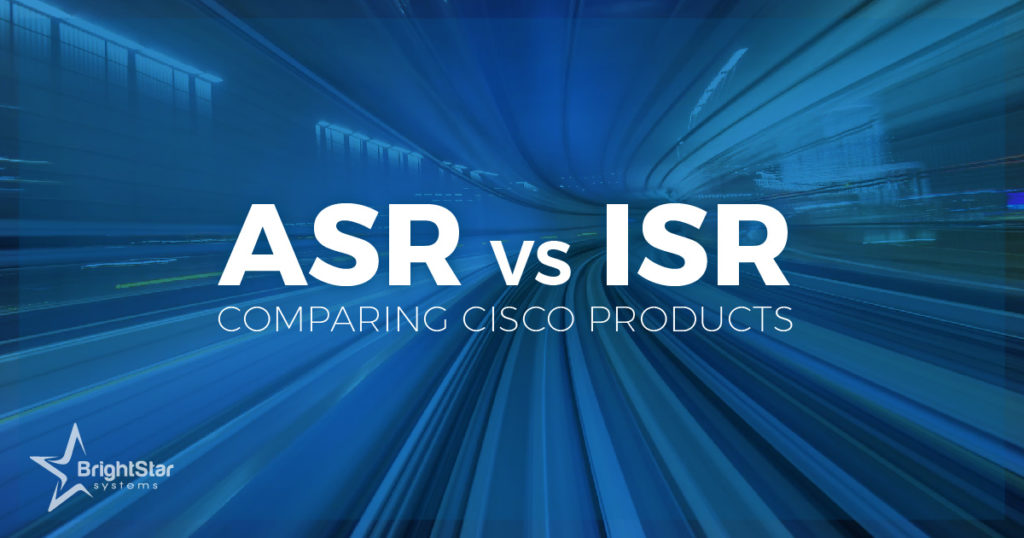 Cisco manufacturers a wide variety of routers that are suitable for small-scale and large-scale computing environments. Two of Cisco’s primary router lines fall under Aggregation Services Routers (ASR) and Integrated Services Routers (ISR), which are designed for two distinct purposes. Read on to find out what these routers are designed to do and learn about some of the key differences between Cisco ASR versus ISR routers.

Cisco’s ASR series are best suited for enterprises and service providers. They are ideal for high-bandwidth applications, such as video streaming. The ASR series of routers currently includes the ASR 900 Series, the ASR 1000 Series and the ASR 9000 Series.

The ASR 9000 Series also uses different software from the other two series; it runs on IOS XR, whereas the ASR 900 Series and the ASR 1000 series run on IOS XE. Cisco’s IOS XR operating system is designed for Cloud-scale networking and allows for software image upgrades and module changes without impacting operations.

ISR routers provide reliable, secure branch office connectivity and a robust set of features that enable cloud computing, secure networking, multimedia performance, and mobile connectivity. The ISR series also use Cisco’s IOS operating system, as opposed to IOS XE or IOS XR. Since ISR series routers are made for less computing-intensive environments, they have a much smaller footprint than ASR series routers. The ISR series also have lower maximum Ethernet speeds; the higher-end router of the ISR series, the ISR 4000, supports up to only 10G Ethernet.

Key Similarities and Differences Between Cisco ASR and ISR Routers

Although there are many similarities between Cisco Aggregation Services Routers and Integrated Services Routers, there are also several key differences, which is ultimately more important when considering purchasing Cisco ASR versus ISR routers.

The biggest difference between Cisco ASR and ISR routers is that ASR routers are for enterprises and service providers, whereas ISR are for customers with small- or medium-sized networks. In general, because the ASR series are designed for large-scale applications, they have more features and higher performance levels compared with ISR routers. For example, ASR routers can handle faster Ethernet, they have a higher port density, and the ASR 9000 Series is the only router series that has core routing capabilities.

In terms of similarities, both Cisco ASR and ISR routers offer secure WAN connectivity. They have also both been approved to secure sensitive data when configured with the PSN Interim IPsec Profile. And, although the Cisco ASR 9000 series provides cloud access like all the Cisco ISR series, the other two ASR series do not grant cloud access.

If you’re in need of Cisco ASR routers, BrightStar Systems has you covered.

We offer outstanding service, competitive prices, fast and safe shipping and expert knowledge in pre-owned, used and refurbished Cisco ASR routers. Our staff is trained and knowledgeable about all our products and can answer any specific questions you may have.

If you’re not quite ready to pull the trigger, check out the in-depth buying guide we put together, which walks you through the entire process of purchasing used network equipment.

Our customers include, but aren’t limited to, large-scale data centers around the world, and we offer wholesale and bulk purchasing to other dealers who resell products. We also purchase used products from businesses and consumers looking to upgrade their equipment.

It doesn’t matter if you’re purchasing Cisco ASR series routers, or any other of our Cisco networking equipment, all our products our are fully tested and come with a one-year, in-house warranty.

In addition to pre-owned Cisco hardware, we sell used Juniper and Arista networking hardware. Check out our Juniper MX vs Cisco ASR Routers page to see how those two router series compare.

And to see how Cisco’s hardware stacks up to Arista’s equipment — particularly Ethernet switches — take a look at our Arista vs Cisco comparison.